I am going to cheat a little for this post and talk about one of my husband’s ancestors, Hans Michael Hold, Sr., and his involvement with the Hebron Lutheran Church. The Hebron Lutheran Church is located in Madison, Virginia, the original building built in 1740 is still standing, and the church itself is the oldest Lutheran church still in use in America. 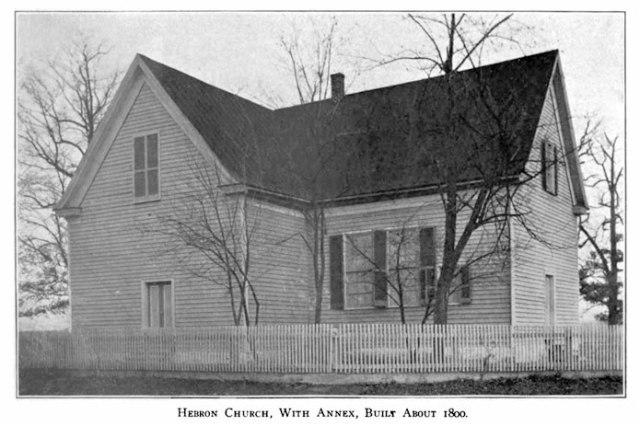 Hans Michael Hold is the 8th great grandfather of my husband, and I have just recently researched this line and am proud to say that I have complete documentation in place from my husband to Hans Michael. This is often hard to accomplish when living far from the states where the records exist, but I have managed it this time!

Hans Michael has a very compelling story, and we are fortunate that 1) the American records are readily available 2) the church records in Germany are in tact and 3) there is a whole society dedicated to the research and preservation of the settlement where Hans Michael lived after newly arriving from Germany.

Hans Michael was baptized on 30 Dec 1696 in Stetten am Heuchelberg in Baden, Germany, the youngest child of Martin Hold and his second wife, Anna Maria Brückmann. Martin Hold died in 1710, and 7 years later, his widow, her new husband, and son Hans Michael attempted to immigrate to Pennsylvania with other Germans with the same religious convictions. However, their ship captain sold the passengers on board as indentured servants to Alexander Spottswood (a governor of Virginia) to clear his debts. Not speaking any English, the Germans, including Hans Michael and his family, were trapped.

They served out their terms of seven years at the Germanna settlement in Virginia where Spottswood ran an iron works. An amazing part of this story is that the site has been preserved and can be visited! (Put that on my list of genealogy relate sites to visit.)

Understandably, after Hans Michael finished his servitude, he moved his family to the Robinson Valley in present day Madison, Virginia. While there, Hans Michael joined the other German families in a new Lutheran congregation called Hebron. The congregation needed funds to build a church large enough to house the 274 worshipers, so in 1734, Hans Michael and two other members, Reverend Johann Caspar Stoever and Michael Smith, traveled to London, Germany, and Holland, to raise the funds. They raised the money, but Hans Michael and Stoever had an argument during the trip and Stoever died on the return journey to Virginia.  The church was built in 1740 and originally measured 50 ft by 26 ft but several additions have been made to the structure over the years.

This beautiful church my husband’s ancestors helped build and where they worshiped is still an active place of worship. We are both hoping to visit the church and the area in the future. It’s always such a treat to be able to step into a place where ancestors lived and breathed; it somehow provides a special connection to them that isn’t attainable when looking at records. I think this is particularly true for this church and Hans Michael. His Lutheran faith was obviously so important to him and his family that he left Germany for it and later willing returned to Germany and London (where his future as an indentured servant was sealed) in order to provide a house for his religious community. A meaningful place to him will be a meaningful place to us.