When searching for immigrant ancestors who came through New York, I have found that checking The Evening Post for ships lists sometimes gives additional information about the ship, its progress, and its passengers. The marine lists in later papers tend to be more detailed, but that doesn’t mean earlier ones should be forgotten!

My 5th great grandparents, Martin Krieg and Barbara Mörch, left their home in Opfingen, Baden to begin a new life outside of Cincinnati, Ohio in 1837. Martin and Barbara sold their house, land, and moveable property to pay for the passage of themselves, 5 of their children – Barbara, Johann Georg, Salome, Johann, Johann Jakob – and their 2 grandchildren – Eva and Johann Martin. The family made the journey from Opfingen to the French port, Le Havre, where they boarded the ship Magestic in late June and early July. 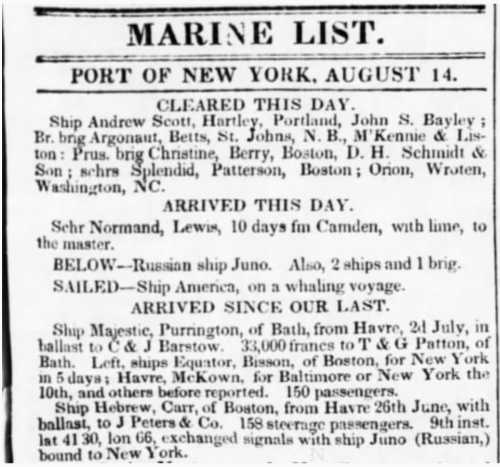 This small article reports what ships left and arrived from the Post of New York on that day. The ship that concerns my research is in the section “arrived since our last.” It reads:

Ship Majestic, Purrington, of Bath, from Havre, 2d July, in ballast to C & J Barstow. 33,000 francs to T & G Patton of Bath. Left, ships Equator, Bisson, of Boston, for New York in 5 days: Havre, McKown, for Baltimore or New York the 10th, and others before reported. 150 passengers.

This article tells us a few things. The Majestic carried 150 passengers, of which the Krieg group was a part. However, if you read the entire passenger manifest, there are actually 156 people recorded.

The ship was originally from Bath, England. As the ship was traveling “in ballast,” it likely means that the only passengers were on board and no cargo. Ballast, or heavy material like stones, brick, slate, or flagstones, was used to weigh the ship down and keep it balanced. So, when the ship Majestic reached its destination, it dropped the passengers in New York, and the ship’s master, Joseph H. Purrington, traded their weight and the ballast for actual cargo that would be then transported back across the Atlantic.

The article also gives the departure date – 2 July. It took about 6.5 weeks for the Majestic to reach New York. This is a very long time for a family to be stuck on board with 148 other passengers plus crew. Fortunately for the passengers on this ship, no deaths were reported and all of the Kriegs arrived in New York safely.

Below is another article that appeared in The Evening Post on 15 August. It gives some information about the prices of certain goods sold in Le Havre, including cotton, coffee from Havana, Indigo, and copper from Peru. Products like cotton could have been collected in New York to be sold in France on ships like the Majestic.

Before the passengers could disembark, the master of the ship, Purrington, had to record the name, age, gender, occupation, former place of residence, and destination of each passenger. Sometimes the master wrote down incorrect or vague information rather than obtaining details from the passengers that genealogists would deem very important. Everyone is listed as a laborer, from Baden, and going to Ohio. Here is a partial list showing the Krieg family: 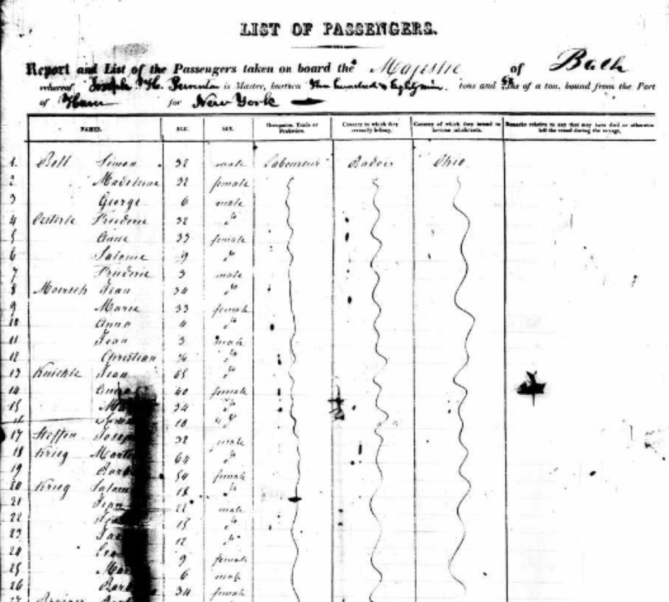 Listed are: Martin and his wife Barbara, daughter Salome, Jean, Jean, Jean, Eva, Martin, and Barbara. Jean of course is the French version of Johann, the three boys being Johann Georg, Johann, and Johann Jakob. After disembarking, the family left New York and made their way to Cincinnati and Martin and Barbara’s oldest son, Martin, who was already living in the U.S.