To be completely honest, I didn’t want to write something for this prompt. I have two “black sheep” in my family who were particularly bad, and it was a difficult decision which one to even pick. For various reasons, I just don’t feel very comfortable showing the world the worst parts of my family. So this week, I picked the “black sheep” who is fairly far away on the family tree. Please be advised, it is a truly awful story.

James Henry Wynn was born on 25 June 1825 in Robertson County, Tennessee. At this time, his parentage is still unknown, and I have not conducted any research on him myself. He married Theodosia Hooper on 14 July 1847 in Robertson County. I have not been able to locate them on the 1850 census, but the family does appear on the 1860 census in Osceola, Missouri. He was a cooper with $500 worth of personal estate. Theodosia was listed, as well as their four daughters: Martha E., Mary E., Louisa (my ancestress), and Harriett. I am not sure why they are living in Missouri at this time (more research to be done). By 1880, James and Theodosia were living in Dickson County, Tennessee with their youngest children.

Sometime between 1880 and 1890, Theodosia died. On 27 November 1890, James married a woman named Sarah Francis Anderson, a widow with children of her own. Apparently, Neither set of children got along well, which caused unhappiness between James and Sarah. Marital troubles and other unknown reasons contributed what occurred on the night of 24 July 1892. Perhaps the title of a newspaper article covering the event best describes what happened: 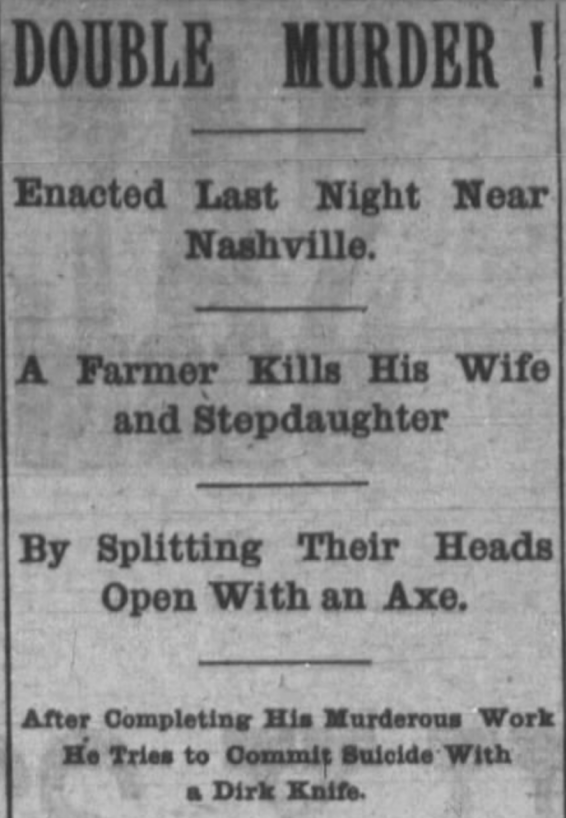 What a horrible thing to happen, and how horrifying to know that my ancestor was the culprit. On July 26, another article ran in the Tennessean detailing the events on 24 July and 25 July. The article tells the whole story better than I could, so I am going to transcribe it here.

He Had Murdered His Wife and Her Daughter.

Wynn Is Arrested and Started to Charlotte Jail.

Officers and Prisoner Are Stopped by a Mob and Wynn Lynched – Details of Both Crimes.

DICKSON, TENN., July 25. – [Special.] – “Died by hanging at the hands of persons unknown.” Such is the verdict of the jury summoned this evening to hold an inquest over the body of James Wynn.

The history of the terrible crime and the swift retribution that followed it is herewith given:

About two years ago James Wynn, then a citizen of Colesburgh – a little railroad station two miles east of here, at the junction of the Centerville Branch of the Nashville, Chattanooga & St. Louis Railraod – was united in marriage to a Mrs. Anderson, widow of Jas. Anderson, a former citizen of this town. Shortly after the marriage the couple removed from Colesburgh to the Anderson homestead, about one-half a mile from Burns, Tenn.

During the month of September, 1891, Wynn induced his wife to file a bill in chancery against her oldest son, Wm. Anderson, a prominent hardware merchant, in this town, who had administered on his deceased father’s estate. Said bill alleged an improper disposition of the proceeds of said estate. Mr. Anderson at once commenced negotiations with his mother, proposing to surrender all his own interests in the matter rather than to have any family jars. A settlement was speedily arrived at. Mr. Anderson agreeing to pay his mother a certain sum of money, with the understanding that such a concession was to be for her separate use and benefit, and not in any way to be subject to the demand of her newly acquired husband, Wynn.

It appears that during the present year, Mrs. Wynn had frequently in conversation with her son, William, alluded to the persistent manner in which her husband would dog and worry her to let him handle this money. Some of Wynn’s children by his first wife also seemed to be at outs with their stepmother and her children, and little by little the friction became worse and worse until Sunday evening when the climax was reached.

Just how the fearful tragedy took place no one can tell, but Jas. Wynn’s own statement is given as perhaps throwing as much light upon it as any other and more theoretic view might do. Said Wynn this morning: My wife and her child Mollie, aged 12, had gone to bed, and I sat down on the bed and said to my wife, “We’ve everything around to make us like like folks, and why can’t we do it?” She replied, “I don’t propose to live another day with such a low down thing as you.” As soon as she said this I grabbed a double-blitted ax and knocked her on the head.

The crime was committed Sunday night at 8 o’clock. After the commission of the awful deed Wynn walked to Colesburgh with his little son, to the house of Doc Adcock and related to him what has been described above, and asked him to look after his little boy as best he could, for he meant to kill himself. In spite of Adcock’s remonstrances he went out into the bushes near by and made an ineffectual attempt to shoot himself, the bullet grazing his forehead. He then stabbed himself in the left breast, but failed to reach a vital spot. The neighbors, hearing the report of the rifle, came and found him with the knife sticking in the wound. He was taken to the house of Mr. Binkley Larkins, and Dr. Hemslee and Mr. Wm. Anderson, of Dickson, were at once sent for.

On their arrival at the scene of the double murder a horrible spectacle presented itself.

Shortly after 6 a.m. to-day, when the news of the devilish crime got thoroughly noised over the community there was a general exodus in the direction of Colesburg.

At about 8:30 o’clock to-day Deputy Sheriff Alexander arrested Wynn at the house of Binkley Larkins, and Esquire S. P. Larkins appearing upon the scene and the prisoner waiving examination he was bound over to the next term of the Circuit Court and placed in the hands of Alexander, who proceeded forthwith to take Wynn to the Charlotte jail.

Before the officer and his prisoner had proceeded two miles a crowd of about 100 men overtook them and demanded Wynn’s surrender to them. The Deputy Sheriff urged the leaders to desist and let the law take its course, but he was overpowered and Wynn taken from him.

As one of the crowd was pinioning his feet Wynn remarked, “Thanks, you’re the first gentleman I’ve net to-day.”

An opportunity was then given to Wynn to speak, and for a few minutes he addressed the men who in a short wile were going to end his life. He stated that he did not deny the crime; that he formed the determination to carry out the dastardly work on Sunday evening, and that he was equally determined to end his own life and would have done so if his gun had not made a “long fire.” He thanked the men who surrounded him for carrying out what he had failed to do; he wanted to die and die quickly.

When he had concluded his remarks a handkerchief was tied over his eyes, and the rope which had been previously adjusted to the murderer’s neck was thrown over the limb of a sturdy elm tree and grasped by a score of willing hands. At a given signal the horses attached to the hack in which the doomed man was standing were whipped up and in an instant the body of James Wynn hung suspended in mid air.

Once only did the unfortunate man draw up his feet in a convulsive effort and in a very few minutes the self-constituted executioners, after making the end of the rope fast, slowly filed away.

An inquest was held by Esq. S. P. Larkins, who was hurriedly sent for and a verdict returned as set forth in the initial sentence of this communication.

The remains will be turned over to the relatives of the dead man for interment.

The murdered woman, Mrs. Wynn, will be laid to rest to-morrow by the side of her first husband, James Anderson, in the family burial ground near Burns.

Your correspondent, while he recognizes that nothing he can state can palliate the hideous crime committed, wishes nevertheless, to embody in this brief sketch a few suggestions thrown out by relatives of Wynn. These parties state that Mrs. Wynn’s mental condition was unsound and that her conduct toward his was unbearable, that she did not treat his children by his first wife right at all and that these were the causes that led to the final and awful denouncement yesterday; and that the question of money did not enter into their troubles at all. These parties also state that there was no trouble between husband and wife until a fight last spring between little Mollie Anderson and Bobbie Wynn, a son of the deceased.

This much in justice to one who is now before a bar from which no secrets can be hid. It cannot possibly detract from the hideousness of the offense, but is given to show that your correspondent has no desire to misrepresent the central figure in the most atrocious crime that has ever blackened the annals of Dickson County.”

Another account stated that the two were very unhappily married, arguing all of the time. Another correspondent related a few stories about the new Mrs. Wynn hiding James’s possessions and trying to run him out of the house. It is always hard to tell what was really going on from behind closed doors, but there is no excuse for his actions. I do know that women’s property rights were basically non existent, and it would be very difficult and brave for Sarah to try to keep the money she received from her son to herself and not let her new husband use it. I have a strong suspicion that James married her because he thought she had money that would improve his lifestyle. He sounds like an unpleasant man to me, and it makes me wonder how he treated his first wife.

When I asked my grandmother about this side of the family, she just said that there was something really bad on that line, and that her family really didn’t talk about the Wynns. I understand why!

Black sheep family members are always interesting to learn about, but in this case, the crime was more upsetting than interesting.