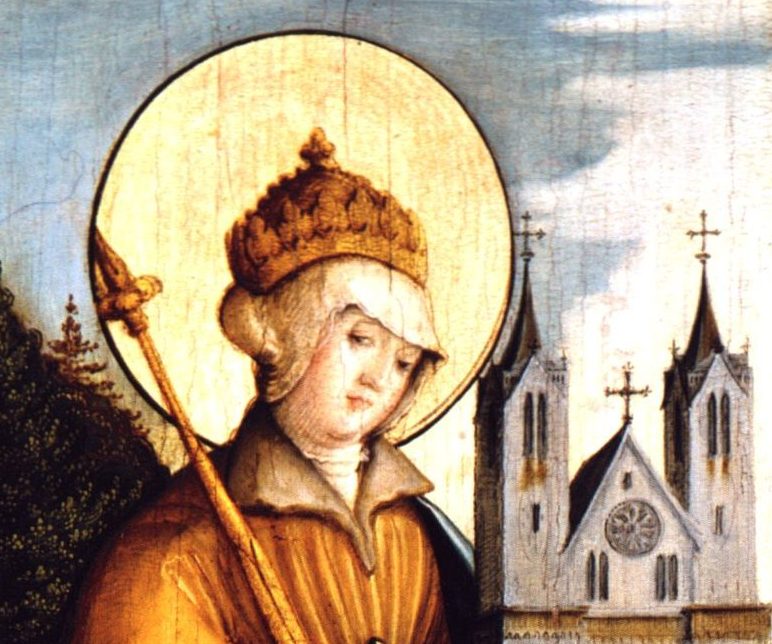 Researching my German heritage has been a priority for me over the past two years, and one branch in particular has been particularly fascinating. My third great grandfather, William Althauser (born Wilhelm) emigrated from Baden in the 1850s with his mother, Anna Krieg Althauser, and his siblings. They settled in Cincinnati, Ohio, near some of Anna’s siblings who had emigrated in the 1830s. Both the Althausers and Kriegs used traditional names like Anna, Maria, and Katharina, but they also used names that I have not seen in other branches of my family like Verena and Ursula. However, my very favorite name is the quite unusual Kunigunde!

My Kunigunde is William Althauser’s 3rd great grandmother on his father’s side, which makes her my 8th great grandmother. Kunigunde was born Kunigunde Gerwig in Maugenhard, Baden, Germany. Maugenhard is a small town located on the edge of the Black Forest in southwest Germany, about 10.5 miles north Basel, Switzerland, about 33 miles south of Freiburg, Germany, and 20 miles east of Mulhouse, France. Kunigunde was born to Paul Gerwig and Verena Jakob in 1676 and was baptized in Maugenhard on 3 April 1676.

When she was 25 years old, Kunigunde married Andreas König on 21 February 1702 in Opfingen, another small Black Forest town just outside of Freiburg. After examining Opfingen parish records, I found that Kunigunde’s parents do not make an appearance, indicating that they possibly remained in Maugenhard. How Kunigunde met Andreas is not known, and I am also not sure why they were married in Opfingen if Maugenahard was Kunigunde’s home parish. However, there are other possibilities for this. Perhaps Kunigunde’s parents died before her marriage, and she moved to Opfingen to live with other relatives. Maybe her family did move to Opfingen but her parents died elsewhere. I will need to continue researching Maugenhard parish records to answer some of these questions.

Kunigunde’s husband, Andreas, was born in Opfingen to Johann König and Barbara Frei and baptized on 25 November 1682. Andreas was 6 years younger than his new bride, being only 19 when they married. Kunigunde gave birth to 9 children who were baptized in the German Lutheran Church: Barbara, an unnamed daughter, Johann (probably named for Johann König), Andreas (probably named for his father), Verena (probably named for Verena Jakob Gerwig), Anna Maria (who died in 1716 at the age of 5), an unnamed son, Anna (who died in 1715 at 14 months old), and Anna (born in 1716).

The youngest daughter and my 7th great grandmother, Anna, married a local man, Michael Schumacher, on 9 November 1745 when she was 29 years old. Only two years later, her mother Kunigunde died on 24 January 1747 in Opfingen. Kunigunde was 70 years old. Kunigunde’s husband Andreas lived another 15 years, dying in 1762.

But what is the history of the name Kunigunde? It is Germanic in origin, “kuni” meaning “clan” and “gund” meaning “war.” This name was popular in the Middle Ages and early Renaissance periods. Well-known women named Kunigunde or a variant of the name included: Queen Cunigunde of Swabia, Holy Roman Empress St. Cunigunde of Luxembourg, Queen Kunigunde of Bohemia, and St. Kinga of Poland. The most famous woman with this name was St. Cunigunde, who married the Holy Roman Emperor Henry II. She was very involved in charitable works and founded a Benedictine monastery where she retired after the death of her husband. She was later canonized by Pope Innocent III on 29 March 1200.

After learning about St. Cunigunde, I wondered why Paul and Verena chose to name their daughter Kunigunde. St. Cunigunde’s feast day is March 3, so it is possible that Kunigunde was born that day (she was baptized 3 April). Perhaps her parents admired this saint’s devotion to charity, even though they were not Catholic themselves. Maybe she was named for another family member or friend of the family. Whatever the reason, my ancestress was given the name of a strong woman who had genuine concern for those less fortunate than her. And although this name has largely fallen out of use, I think it is quite beautiful!